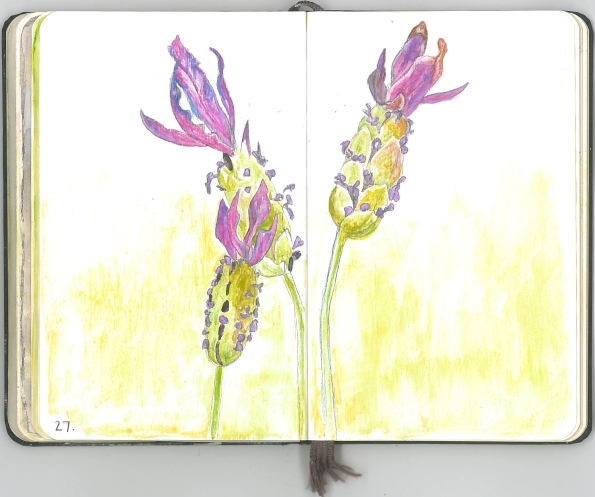 Don’t you just love running your hands across a flowering lavender bush? (Although I have learnt to be careful – I captured a bee in my fist once. She didn’t sting me but I got a fright.) I love that they attract bees, who are in such dire straights and who just want a varied diet. I love that as a garden object, a lavender bush requires no attention at all. Even a drought and a heat wave, which seemingly killed one in my garden, wasn’t enough to make it succumb – a little bit of rain revealed new shoots coming up between the dead branches.

As a herb, lavender is often prescribed as having a calming, healing effect – steeped as a tea, or diffused as an essential oil.

Let me officially set the record straight: Lavender is a balancing herb. If you require soothing, yes, it will calm you down. If you require reviving, as I in my sleep-deprived state (small children, amirite?) often do, then that is what lavender will yield. The “Theater of Dreams” lavender and chamomile blend tea which seemed so alluring merely succeeded in keeping me wide. eyed. awake. Yes, one can be tired and in need of relaxing.

A lavender bush will bear flowers no matter the season. I find that in drier conditions, the flowers dry up too. But just a little bit of water is required for it to bloom.

The purple colour evokes royalty, nobility, spirituality, purity, devotion, and caution. In ancient Greece, lavender symbolised the holy state of temples and shrines. In ancient Rome, the flowers were a luxury to be enjoyed only by the wealthy. I find this strange because lavender plants are ridiculously easy to propagate (I mean, if I can do, you can too) and I’m sure Italy has the perfect weather for this bush, because that’s the area where it comes from. Maybe only the wealthy had time to contemplate the lavender’s beauty?